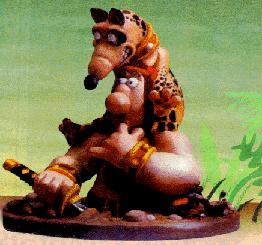 The sculpting talents of Sergio Aragonés are premiered with this cool three- dimensional rendition of Groo and his beloved dog, Rufferto. Each cold-cast statue comes completely assembled and painted, ready to display. Produced as a limited edition of only 750, each statue comes packaged with a numbered Certificate of Authenticity, in a decorative, full-color box featuring new artwork by Aragonés.

5 sets of lead miniature figures of Groo and Friends. Dark Horse Miniatures which made these are long gone, (Dark Horse Comics have nothing to do with them), so these miniatures are REALLY rare. Just about impossible to find! Not even Mark Evanier have a complete set...


Originally compiled by Ruben Arellano for *The Unofficial Sergiography* 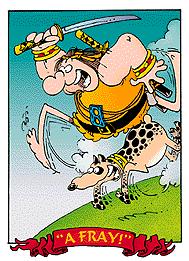 6 Pins of Groo and friends. Groo, Rufferto, The Sage, The Minstrel, Taranto, and Chakaal. Plus a special Sergio giveaway.

Originally compiled by Ruben Arellano for *The Unofficial Sergiography*

Please Note: This Screen Saver is NOT a licenced Sergio Aragonés Groo product.

It's a freeware program made by John Astill. It's made for use under the built-in screen saver in Windows 3.xx. Copy the file to your Windows catalog, and enable it from the 'Desktop' icon, in the 'Control Panel' folder.
Under Windows '95 just unzip the file to your windows directory and choose it in Control Panel / Display / Screen Saver.
Download Groo Screen Saver Ver. 1.0. 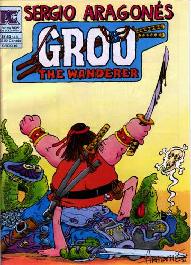 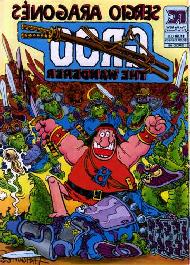 Originally compiled by Ruben Arellano for *The Unofficial Sergiography*

11"x17" with preprinting of image on Epic #2, except with black background.

Featured poster was 11"x17" cover art for Groo #1. The other side had previews of other January releases (including Groo #1).

Several different articles of clothing in various colors with embroidered images. New Illustration in their catalogue. 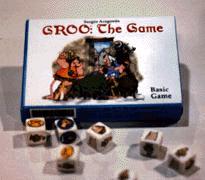 The game is just like the book-GROO means bad news! Players try to keep GROO away from their town as they build their community and recruit an army. Unfortunately, GROO can always find a way to diminish any player's hope of winning. This fast paced game of "Hot Potato" will amuse everyone who stands in GROO's way!
GROO: The Game comes with 60 cards, seven dice, and a rule book. Designed for 2 to 6 players, the card combinations are endless. The average fun-filled game lasts 30 to 40 minutes and caters to kids of all ages above 10 (as well as cheese dip lovers of any age). 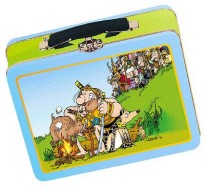 Art on front and "I support the CBLDF" on back.

8.5"x11", Groo and an army are invading a room of monks with manuscripts.

Groo scratching head with word balloon "Did I Err?".

Limited release, featuring art from the back of the game box and modified text.

Features the cover to Groo #1.